The new 2015-16 financial year is only six weeks away, and with the release of Federal and Victorian State Budgets, there are a few points to note and opportunities to explore.

Let’s first dive into the two popular stayers in the Government toolbox that require immediate attention and then go over proposed new opportunities.

The Australian government provided up to $2 billion per annum in additional funding to eligible businesses via the R&D Tax Incentive during the 2013-14 income period, which is an increase of over 850 registrations compared to 2012-13.

Of the over 7,300 companies to complete registration for the R&D Tax Incentive for the 2013-14 income period: 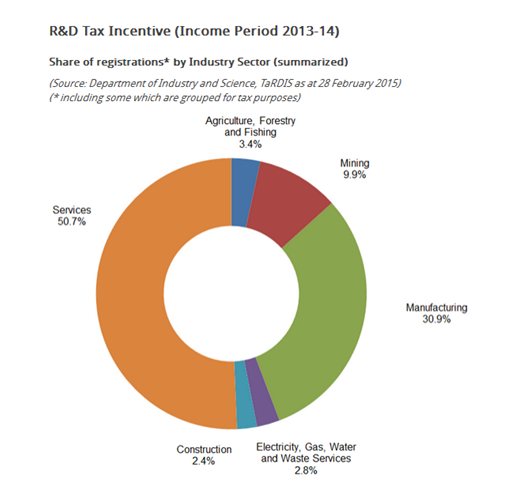 Here is a quick reminder in relation to the upcoming R&D Tax Incentive deadline and other actionable items.

AusIndustry has released a number of guidance papers in relation to different industries such as Energy, Construction, IT and Manufacturing.   It is worth reviewing these guides as they can assist with maximising claims and meeting compliance obligations.

Please feel free to contact us should you wish to obtain copy.

Austrade considers this to be mainly due to the changes made to the scheme by the Government in 2014 to enhance access to the scheme following the allocation of an additional $50 million over four years commencing in 2013-14. This increase may also be due in part to the lower Australian dollar in 2013-14.

Accurate and complete applications lodged before end September 2015 will normally be processed more quickly than those lodged in October and November, or later, facilitating early cash flow to those applicants of up to the amount of the initial payment ceiling.

One of the main focuses of the 2015 Federal Budget is supporting small businesses and stimulating job growth throughout Australia. Proposals outlined in the budget included:

The Entrepreneur’s Infrastructure Program, introduced in the 2014-15 Budget, is aimed at investing in growth and productivity for globally competitive industries.

The current budget revealed that $526.4 million in funding has been provided to support industry objectives for a four year period from 2015-16 onwards. Other government programs can be complemented with this service, such as the R&D Tax Incentive, Industry Skills Fund, Industry Growth Funds and the Manufacturing Transition Fund.

The Victorian government has recently announced plans to establish several new funds and grant programs in the 2015 Labor budget.

The funds are aimed at stimulating job growth in both regional and metropolitan Victoria and establishing a higher skilled workforce. This comes after a 1.9% increase in unemployment between 2010-15.

The Future Industries Fund grants will be aimed at key industries such as:

While eligibility criteria and the exact structure of the Future Industries Fund is yet to be announced, it is likely that there will be two streams of financial assistance:

The Regional Jobs Fund will aim to support the following activities:

Also included in the budget is the $508 million Jobs and Investment Fund, which features a $60 million start-up initiative to assist entrepreneurs and emerging companies in establishing themselves.

Please contact Saving Point on 03 9555 3551 or [email protected] should you wish to discuss any of the above programs and opportunities further.